In a way I can’t believe my luck. I am the husband to an amazing woman. I am the father to a fantastic kid. I have a job that while is not letting me use my full abilities, at least stimulates me.  I have a beautiful home that is full of great memories.  But sometimes I look around and I wonder how I got here, how this is the finish line for years of both good and bad choices.

When I set my brain to “way back” mode it’s sad that it’s the embarrassing and painful memories that flash back first.  The times during freshman year in college that I was the butt of pranks involving both shit and fire. The girls I tried to woo who looked at me like something that was stuck on the bottom of their shoe.  Everyone has these types of memories, but my brain clings to them more than the others I suppose. I can remember in HD clarity the times I embarrassed myself in thinking I was acting “cool”, and now thanks to Facebook there are now ways to share such moments. This was shared with me a few years ago.

At the time I thought there was nothing more unlucky than an umbrella opening up inside.  My roommates thought it would be funny to present me with many opened umbrellas around exam time, and here I am warding them off with a good luck charm I bought on my Israel trip a year before.  I cringe when I think of this. Mind you I wasn’t always on the receiving end. I wasn’t the whipping boy. I gave as well as I got. I remember covering one of the holders of the umbrellas’ doors with 4 or 5 boxes of saran wrap, then using a hair dryer to seal it.  I remember crushing up lady laxative into the other holder’s beers.  But it’s the cringe worthy memories that bubble up in my mind first.

I recently heard about a rare mental condition called Hyperthymesia.  According to a subject matter website there are “only 12 known people in the world who are able to remember their lives on a day-by-day basis. People with hyperthymesia are able to remember the events of any given calendar date, usually back to puberty, with stunning and accurate detail”. I can’t imagine having a worse super power. I will admit I would love to be able to relive some of my life highlights. But knowing my minds willingness to recall the embarrassing and cringe worthy, I am glad I don’t have it.

What the hell? I am going to turn forty in less than six months. How the holy hell did this happen. I swear on a stack of mint condition limited edition comic books that when I went to bed last night I was 14.

I remember it clearly. I was in my bedroom on Scott view Court. My sister Allison in the bedroom to my right and my youngest sister Erica in the room down the hall. Next to Erica’s room was my parents’ bedroom.  Granted, that’s normally not a place of interest for the average 14 year old. However I knew my father had a stack of Playboys in the bathroom hidden under the sports magazine. I knew this because I stole one and that is what made me a hero at school. God knows I needed something. 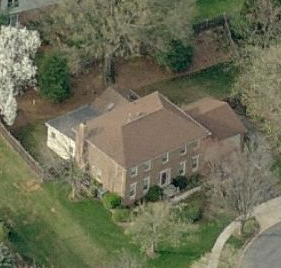 Downstairs was the landing that I always thought of as the “timeout steps” that was the spot that we were sent when our parents thought a comment was out of line at diner.  Around the corner was the office. In this office was the most cutting edge technology available at the time, the glorious Apple II GS computer that my father was so proud of.  In the kitchen was our octagon table where everyone had their own side at dinner time.  There was the door to the basement where artwork was displayed. Up until my youngest sister passed the age for art, and the last thing she made hung up there forevermore.

Down through the basement door was a place that had a lot of names.  Kid’s playroom, rainy day activity center, secure enclosed place to put the kids with a lock on the outside, all would be accurate.  Down there was a myriad of fascinating things. Not the least of which was the storage room. To the uninitiated the storage room may seem uninteresting and you might wonder why it interested it.  I can’t really explain why it held the fascination it did. Maybe because it held clues as to who my parents were before they became parents. I remember finding the china my parents got for their wedding that never saw the outside of their padded cases. I saw boxes unpacked from previous moves, I saw things that amazed me, and they were all mundane things.

I couldn’t imagine being as old as I am. I still don’t think of myself as an adult. Then I saw the perfect thing that crystallized my feelings. 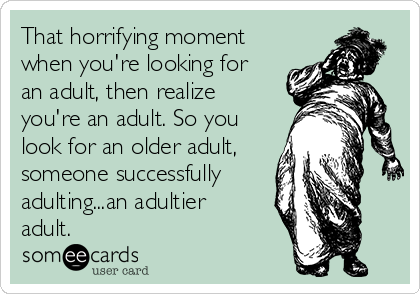 I had a thought.  At what point do we felt like we are done, cooked, ready to go.  I am complete. I can hang up my kid hat, and put on my adult coat and go towards the future like a prospector towards a mine. Full of hope and confident of their own success.  It is terrifying to think that everyone is this way. I want to think that the other people around me know where their feet are heading. I want them to know why they pointed them in the direction they did. I want to think that I am an aberration.

Greetings! I can only imagine what bizarre combination of keystrokes led you to this blog, but while you’re here I hope to keep you entertained.  My name is not important as much as the stories I have to tell.  I am a husband, father, small business worker, and a member of Generation X.  My purpose in witting this blog is a combination of things. I wanted to write all this down and seal it in a bottle and throw it out to sea, but as I live three hours from the beach that couldn’t happen.  So here I am throwing my words out into the virtual ocean. And just like the real ocean it’s scary out there, just Google “Rule 34” and see what I mean.  Now that all the pleasantries are out of the way lets get down to seeing if I can keep you reading.

As I mentioned I am work as the equivalent of  a small business owner. I think lots of little kids, who ran summer lemonade stands dream of a day where they would be rich if only they were their own boss.  They dream of a day where they have tons of employees running around doing what they say, lines of customers raving about how their lemonade is the best.  There is a reason that most don’t choose this path as adults.  IT’S BECAUSE IT’S FUCKING HORRIBLE.  You may have a job that you hate, but you know that every two weeks you will get a paycheck.  This is something my employees can count on.  But not me. Every day is like being a 14 year old . Wait, hear me out.  You are afraid people wont like you. You stare at the phone hoping it will ring.  You want to work, but a lot of people wont give you the chance. Look at your four walled human hamster maze and feel good in the fact that while the boss may not know you name, the HR department does and will still send you a paycheck.